Recently I had the pleasure to journey to Pompeii and Paestum. These were places I had only experienced through books. I was with two friends and we had hired a car which was the only way one can ever consider to really travel to these places. Though it is possible to visit Pompeii by train or coach the Italian transport system can be a little unpredictable.
Despite the heat of day we visited Pompeii with the view of Mount Vesuvius in the background reminding all who visited she is still active and probably ready to spill her guts at any minute. There was little shade apart from the walls of the buildings excavated. So when we walked into the Villa of Mysteries we were most pleased by the gloom of the rooms. 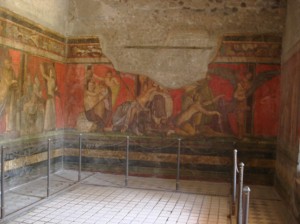 It is clear that the Romans had achieved a lot in art; murals, fresco’s and sculpture; building on much of the knowledge the Greeks had developed. Most of which disappeared with the pagans and the dark ages in Europe when the Roman Empire collapsed. Their ideas and philosophy only survived in the Middle East where Islam was in its prime.
The Villa of the Mysteries is proof of this; the marvelous fresco’s that remain are of the finest that can be seen of ancient Rome. Hidden for many years until excavated; in a way the Vesuvius although destructive at the time saved and preserved the past for the future. It is a villa dedicated exclusively to a female cult of Dionysus. The ten scenes pictured explain the ritual of an induction of a new member. The initiate may well have been someone who was also about to get married or planning to corner her man.
I wonder if these fresco’s were painted by a female artist who may have gone through these very rituals herself describing the process of initiation that was only viewed and accessible to women. The artist(s) were of the highest standard of their day and would not just have been employed to create the pictures but also to maintain them.
The rest of Pompeii was a vast excavation and it was clear that we would not have the time to see everything. Passing through the roman cemetery as quickly as we could, the heat was heavy in every sense. I would suggest that if one has the opportunity to visit to take a parasol so that one is in shade. We made our way to the house of the prostitutes which also happened to be one of the busiest parts of Pompeii. The fresco’s were less well preserved but one could clearly make out sexual positions documented on the walls. To arouse their visitors and decorate the house; Roman messages scratched on the walls probably mentioning their sexual exploits. 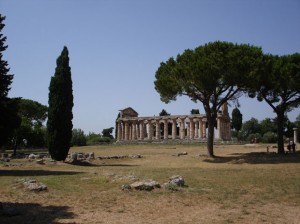 Paestum originally named Poseidonia founded in 600BC is the remains of the ancient Greeks who colonized the region before the establishment of Rome and its empire. Poseidon was the brother of Zeus and a god of the sea and Poseidonia was originally on the coast but now can be found inland; eventually the colony was taken over by the Romans themselves. These grand colonnades would have been standing in the time of Marco Polo the traveler and far longer to give you the sense of time that these buildings were around for.

A car is needed to reach this place; lots of parking was available in the shade which was a reasonable price. There is the national museum dedicated to this site where the temples are located. More importantly there is a place to eat and drink Italian style with plenty of shade to rest. We decided to only visit the site itself and not to go to the museum with intention to go to the beach a little later.
The temples in their day must have been inspiring and makes one think ‘a place of Gods’. These temples are probably the best remains in Europe of this kind. The design of all the temples all use Doric form of colonnades. The Temple of Hera is the earliest of the temples on this site. Hera was also known as Juno who was married to Zeus and is the goddess of light, marriage and childbirth. She was also associated to the mythology that the lily was to have come from the milk of goddess Hera. The largest is the temple of Neptune and is the best preserved. It is also dedicated to the goddess of Hera. 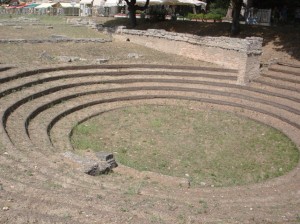 The further north we walked we arrived at the forum which is of Roman origin. Then we passed the Comitium along the way which was used to do the local politicking and trials. Heading for the temple of Ceres which was the last of what we planned to see before heading off. Ceres is also known as the goddess Athena who was the daughter of Zeus. She is a goddess of wisdom, learning and warfare. The owl is associated with her and is patron of Athens. Minerva is her Roman counterpart. This temple is the first you see from the road as you arrive in the car. It is an amazing place and worth the effort to travel to. I wish we had spent more time there but the beach was the next stop.