So here we are again. It’s that time of year when The Turner Prize rolls into town, giving four young-ish (under 50) hopefuls the chance to be catapulted into the artistic equivalent of the pop charts, not to mention getting their mitts on a cool 25 grand.

After a trip up to Gateshead’s Baltic Centre for Contemporary Art, the Turner Prize circus is back living with its parents at Tate Britain. Intriguingly the format has changed in that the artists are basically showing the work for which they have been nominated – a no brainer for some and something of a dilemma for others, more of which later.

As you may or may not already know the shortlisted artists are: The bloke who does huge monochrome imaginary metropolis drawings (Paul Noble); the video artist who mashes up a fire at Woolworth’s, a choir, and church architecture (Elizabeth Price) a study in photo and film of radical psychologist R D Laing (Luke Fowler); and the enigmatically named Spartacus Chetwynd and friends, the first ever performance artist on the shortlist. 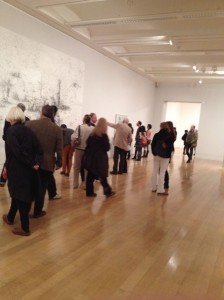 The Turner Prize is of course not a group show but instead it’s a show where bizarrely you compare and contrast the work of the artists laid before you allowing yourself to be a secret judge, despite part of you thinking a competition like this is utter nonsense.

Spartacus Cheywynd is showing key moments from her nominated exhibition Odd Man Out 2011 which apparently addressed ideas of democracy and the consequences of decision making. What?

Sadly I wasn’t there at a time when performances were running despite The Tate saying they occur  from 12:00-17:00  - not around 3pm it seems, bad Tate, bad Cheywynd.  Nor was I invited to present myself to ‘the oracle’ for a pronouncement on my future actions or to watch a puppet show of the tale of Jesus and Barrabas as promised in the blurb. But I did see a huge yellow bouncy slide on it’s side – think health and safety folks.

I also watched videos of earlier performances which seemed part pagan rite, part homage to mother nature, part celebration of the kind of fantasy childish play-acting we all did once upon a time. Compared to anything else I saw, it looked playful and fun but probably not serious or contemporary enough to please the judges. What you see is only a small part of a performance that appeared at a her recent Sadie Coles gallery exhibition so it’s hard not to think that Cheywynd’s work is being seen through something of a keyhole here.

Luke Fowler exhibits his nominated film All Divided Selves 2011, an exploration of the ideas and legacy of Scottish psychiatrist RD Laing (1927-89). Fowler also displays a series of diptych format photographs, Two Frame Film 2006. Having studied Psychology in a previous life I have more than a passing interest in RD Laing and wanted to be illuminated. The film shows you the guts of some of his sessions with schizophrenics, but the rambling grainy footage is more curiosity than film art and detracts from the real subject in hand. In fairness it is probably necessary to see most of this 40 minute film but I didn’t have the time. I will return when I do and re-review Mr Fowler but what I did see suggested most of Laing’s pronouncements were hippy-fuelled psychobabble. I suspect his contribution was to challenge the inhumanity of the current status quo but he perhaps failed to do much more than get later generations to take the role of talking therapy more seriously for a few moments in time. The patients in the film also confirm that schizophrenia was as stubborn a condition to ameliorate then, as sadly it is today.

Paul Noble exhibits a body of work from his elaborate pencil drawing project depicting the fictional place charmingly called Nobson Newtown. Spanning sixteen years of work, a range of the painstaking pencil drawings are brought together from the very first in the series, Paul’s Palace 1996, to a recent large-scale drawing not seen before.

I warm to the concept of an imaginary world but on close inspection it’s not a place you want to visit much. The shapes are indistinct and repetitive. The lack of any colour is also tedious. What you do admire is the  sheer industry. Years of intricate pencil work that deserves to be honoured with a prize. But it’s a cold world with few life forms and its curves and rounded structures are redolent of the latrine rather than the languid female form.

Noble has also produced new sculptures made in speckled black and white marble which echo the monochromatic forms within the drawings. These marble shit stones have a sublime beauty but I don’t think the Tate will be selling copies in the Tate shop anyday soon.

Elizabeth Price presents her video installation the Woolworth’s Choir 1979 2012. Comprising three parts, the video brings together distinct bodies of material into a dissonant assembly; photographs of church architecture, internet clips of pop performances and news footage of a notorious fire in a Woolworths furniture department in 1979. Part death fire murder mystery part choral wierdness the work intrigues but ultimately leaves you wanting. Strange clicking during the performance adds to the disjointed nature of it all.

So this year we have a bloke that draws, a video artist, a film artist, and a performance artist. They all tick the edgy contemporary art box, but who will win and will the wider public care?

OK, I didn’t see much to go on but for me the winner is Spartacus Cheywynd because performance art deserves a place at the big table and her work is suitably obscure, hand-made, and random. It’s beauty is that it makes us question the way in which we try to appropriate meaning to ritual and quasi-theatre in a way that defies the usual categories. It invites us to join in and have fun, something that purists hate. Perhaps if only to give such purists a wake up call Spartacus should win. Call me old-fashioned (joke) but I also like the fact that you can’t package it and sell it very easily, which ticks another of my art-should-be-like-this boxes. She won’t win of course because performance art is still too edgy to win such a mainstream prize. 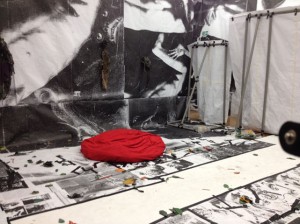 The truth is I’m a softie at heart when it comes to the Turner Prize. I would happily spend time with any of these artists and want to see more. The prize may be annoying and divisive but the judges are on the money. This is contemporary art. Suck it up people.

The runners-up will feel deflated but their lives will never be the same again. ‘Turner Prize Nominee’ on your CV are three words that can put an extra two zeros on any work up for auction.

My choice of winner should of course not detract from the important contribution that Price makes to the world we see through video installations. Meanwhile Fowler makes us confront mental illness through an immersion in the world of R D Laing. If we had more attention on social issues like this the world would be a better place, that’s for sure.

Go see this show. You probably won’t like it. But who said contemporary art was easy?