In my twenties and early thirties I lived in South London. Through an artist friend I was introduced to Keith Coventry who mentioned a gallery he was co-running called City Racing. I liked the sound of it and went there once but sadly cannot remember much of it – we are talking 30 years ago and back then hardly anyone gave a toss about a small artist-run gallery called City Racing, me included. I bumped into Keith one more time at Damien Hirst’s group show at the Serpentine Gallery during that time and never saw him since, so I was pleased to find this book as it gave me a chance to put City Racing in perspective and to know a bit more about someone famous I met when they weren’t famous, as it were. 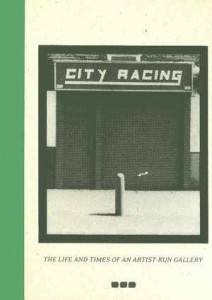 Who wouldn’t want to go back in time and attend some of the 51 shows that took place between 1988-1998? Your younger self could stand on the fringes of a show nodding sagely at some of the artists knowing full well that stardom awaits and probably picking up a few bargains on the way out.

This 160 page book which is authored by the guys is in essence the history of the gallery with lots of nitty gritty details. No word on the more bohemian lifestyle that underpinned it, this is a tale by artists for artists and art historians with minute details of how shows came to life, complete with artists’ submission letters and even the first page of the first signing in book from the first group show.

Also no word on what they thought of the emerging and headline-grabbing Damien Hirst gang at the time.

Nevertheless it’s a captivating approach which allows you a helicoptor view of the genesis of a ‘scene’ that was probably more pivotal than is yet recognised by contemporary art historians. City Racing wasn’t at the centre of the YBA (Young British Artist) scene but the YBA’s didn’t have one location, and many of the YBA’s-to-be passed through City Racing’s doors.

This book is excellent when explaining how the gallery came about (it was a converted squat), how it totally relied on a collaborative ‘committee’, how for much of the time it was pretty much ignored by the mainstream, and how it was part of a growing movement by artists to curate their own shows.

For any artists wanting to set up their own gallery it is also a bible for how to do such things and will open the eyes of any newcomer to the ways in which running your own gallery can be (or was) an excellent way of getting noticed, networking into mainstream galleries, learning to be a curator and making more friends than you can fit in your iPhone contacts book.

There are lots of fascinating details such as:

- How in 1992 Charles Saatchi came to the gallery and bought 3 works (the Daily Sport pieces) by Sarah Lucas for £3,000 but because they had never sold work before they didn’t know how to conduct a sale properly. Yes, clever bugger that he was, Saatchi also managed to get a discount as the works were selling for £1200 each. On the spur of the moment they decided to charge a ten per cent commission, and later raised commissions to 25 per cent realising they had been far too niaive.

- How the gallery was located in a building full of squats known as Oval Mansions with its own loose organisational structure. Far from being an integral part of the squat community the founders lived in fear that they would be told to let people live in the rooms that the gallery occupied.

- How the Karsten Schubert gallery played a vital role in getting funds for City Racing by having a fundraiser event which pulled in £1020, a fortune at the time to five artists on the dole, and how the gallery also got a £10,000 grant from the now defunct London Arts Board.

- How not one show came about as a result of a outside proposal but instead ideas came about from internal discussions and secret reccies of artists under consideration. If the person(s) viewing the work was enthusiastic enough it would be approved by the rest. No others were invited to the meetings because the group feared its lack of professionalism would became plain for all to see. This statement seems incredibly honest and more just a fact that their direct approach made them aware of how fickle were choices about quality of work (and remain to be of course).

The politics of the gallery are laid bare. It was run to show work of artists that were unrepresented like themselves (bar Keith and Paul laterly), and when eventually the chance to show work by represented artists it was hotly debated by the City Racers.

Meanwhile if like me you like minutiae of detail, you will enjoy the reproduction of documents of the time such as Saatchi’s £3,000 payment detailed above and the letter from the London Arts Board offering them a £10,000 grant. Many exhibition works are shown in grainy b/w pictures and one colour thumbnail picture for each show is shown in the final section.

This book is short on laughs and gossip from the time but it is a seemingly faithful account of the creation of possible the UK’s most influential artist-run gallery of the time. Before YouTube and the internet, this is about all we have to go on to recreate the story of City Racing and I for one am grateful that Keith and the others found time to get it down.

3 thoughts on “Book Review: City Racing – The life and times of an artist-run gallery”