A masterclass in catching the soul of the city

Who doesn’t want to do it? You’re snapping away in your city and you’re wishing that you could come up with a photo that will capture an expression or a movement that defines the soul of the city.

These guys make it look easy. 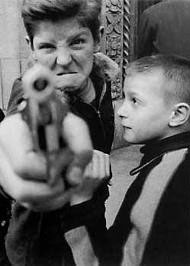 First came William Klein, born 1928, best-known for a photo-book of New York street life called Life is Good & Good published in 1956 in Paris. The raw, gritty, wide-angle photos showed New Yorkers as they were and drew on Klein’s former life as an artist. Some shots were blurry, others out-of-focus. One iconic photo shows a child pointing a toy gun right at the viewer. It takes you a second to realize he is holding a toy, but in that time you are shocked and amazed by the immediacy and energy of the photo.

Although born in New York in 1928, Klein has lived and worked in Paris since 1946 and is something of an American exile. Perhaps not surprising when you hear that back in the 1950s no-one in New York would publish the photos that made him so famous, rejecting them because they didn’t show the city in a good light.

Klein was perhaps able to forge a new way of photographing because of influences from the likes of Garry Winogrand, and Robert Frank, pioneers of the new candid style of American street photography. Indeed in a Tate film interview he says he was influenced by Robert Frank because Frank had said: “If your photos are no good, you are not close enough.” The result is an ‘up-close-and-personal’ style that is often arresting, sometimes mesmerizing.

But perhaps he was also able to forge a new style because he was trained as an artist, not as a photographer, and he even blended art and photography by creating what he called Contacts – huge artworks made from single frames of contact sheets. These abstractions have a jazzy feel, chiming to the club music of the time. Klein also experimented with photograms – images created without a camera by partly exposing photographic paper to light.

His talent doesn’t stop there.

Klein made a film satirizing the fashion industry Who are you, Polly Magoo? 1965-6 which was praised by Stanley Kubrick. Another film The Model Couple 1975-6 which now appears to be a forerunner to The Truman Show, showing a couple living in a flat in which they are continuously filmed. Klein must have laughed when a programme like Big Brother went mainstream.

Klein is surely an artist who has lived more than most and made art about what he has seen and felt. It is an experience to share it with him. 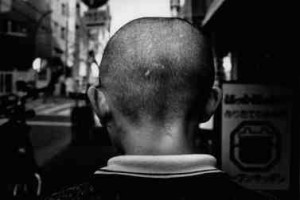 Daido Moriyama, born 1938, is the number one street dude of Japanese photography. He was inspired by Klein to photograph unseen aspects of Tokyo life and went on to make photos of road trip of Japan (inspired by Kerouac) and New York. Eventually the two artists met in Paris. Moriyama is noted for saying: “I finally met Klein”. Klein did a photoshoot in Tokyo in 1961 but they didn’t meet back then.

Moriyama’s work is more abstract and moody. He loves to stalk around the backstreets of Shinjuku, the nightlife centre of Tokyo, snapping away at a rate of knots. He even has a studio above a bar there. Although he now shoots in colour most of his shots are converted to black and white and the contrast is often increased so they become moodier, more elusive.

His subjects are the people of the night, the drinkers, performers, the prostitutes, the punters, the unknown strangers. But he will shoot anything his eye happens to fix on. One of his most iconic pictures is of a feral dog, Stray Dog. The dog is pointing away but its head is cocked to the side, its eyes hungry and wary. The dog is alone and vulnerable, yet clearly adapted to its urban environment. Moriyama says he identifies with that dog, and titled his autobiography Memories of a Dog.

What is clear from Moriyama’s work is that he lives and breathes trying to capture something elusive on his camera. He says he prefers to use a small digital camera because it is less intrusive and that his ideal is to show his photos in a photobook with no particular intended order.

In an interview for the Tate he said: “I just shoot freely. Cities are enormous bodies of people’s desires. I see Shinjuku as a stadium of people’s desires. By taking photo after photo, I come closer to truth and reality at the very intersection of the fragmentary nature of the world and my own personal sense of time.”

It is good to see these titans of modern photography in the Tate. It takes the Tate one step further on its path to being an establishment that recognizes the importance of photography, while giving these artists the recognition they deserve.

Go see it. Your camera will thank you for taking the time.