Question. How many artists’ work can you remember from the fourth plinth at Trafalgar Square? Marc Quinn’s brilliant Alison Lapper Pregnant sculpture perhaps? How about Thomas Schutte in 2007? No, me neither. 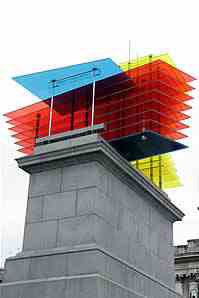 When I say think of a laminated coloured glass sculpture that looked like an ideal nesting place for the errant pigeons, perhaps it starts to come back. My favorite story about it is that the Schutte sacked the British team hired to construct it. He hired a new team in Germany and sent them over to do the job, requesting photos be sent every day to allow him to supervise from a distance – quite right too.

Now Schutte, 52, is back. Both outside and inside the delightful Serpentine Gallery, set snug in Hyde Park.

As you approach his Face and Figures show you see two giant two-headed sculptures each made of two figures tightly bound together in bronze titled United Enemies. They look grotesque and yet harmless because of their lack of expression. At around 13 foot high they are typical Schutte; he loves giant sculptures and another huge figure greets you in the main room in the gallery. This one is golden brown and made of ceramic and bronze, although it has a powdery brown exterior. It’s called Father State, a heavily cloaked authoritarian figure without arms that towers above you. Schutte spent time investigating classical sculpture, including Roman portraits of the emperors – and it shows. 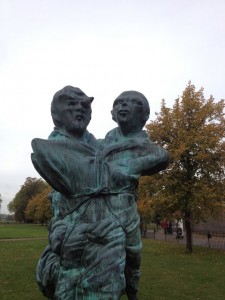 Schutte is old school. He is not a media darling and has stated in an interview with The Guardian‘s Adrian Searle his dislike for today’s media circus: “That is creepy. Horrible. If you get too involved in the media game, your work becomes a sort of jingle -and then it is gone. Perhaps art is becoming like this, or like the music industry – it is everywhere but it means nothing.

He goes on….”The entertainment industry fills up the brain with junk. Media like TV are there for people to forget the day and to be distracted from themselves. The art market is all about trophies being passed from one person to another. Buy this now. Get double when you sell it tomorrow. Money has become a language. I still think the job of the artist is to tell continuous stories with colour, light, lines, form and volume. It is about developing and making work that is independent and convincing.

He will certainly win a few friends with views like that. But is it reflected in his work? Well maybe.

Apart from these imposing figures the rest is more subtle; a score of portrait watercolours of his children, friends and other significants. Light brush strokes and soft colours abound. The only discordant note is the use of thick black ink here and there. Otherwise the lightness contrasts with the heaviness of his sculptures. Most are so slight you can’t make out features very clearly apart from in his own well-crafted self portrait, for which he wore aviator sunglasses. But this is not recent, it is of a young man, the man that studied under Gerhard Richter alongside Thomas Struth at the Kunstakademie Dusseldorf. He is now known for his sculpture, while Struth is one of the best-known photographers on the planet. Richter must have been doing something right. 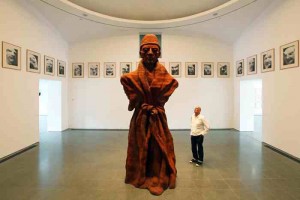 A whole room is dedicated to a series of bronze heads close to the ceiling and facing backwards. They are called Wichte (Jerks), each with somewhat different features as if Schutte was experimenting with different approaches or making us ask “what should a bust look like anyway?” Cheeky Schutte.

And so back to the central room dominated by the huge Father State figure. High up on all the walls around him Schutte has placed large photographs of baby-faced distorted heads known as Fimo sculptures. Their deformed features glower down at you and at the Father State figure. Are they his victims or tormentors? Can he continue to ignore them? Are we witnessing some kind of stand-off?

Schutte is a complex artist. God only knows what he is trying to say. Perhaps he is exploring subverting expectations of ancient sculpture and playing around with simple figurative techniques. It’s both jarring and intriguing, but ultimately a little too oblique for most tastes I suspect, rather like his fourth plinth work. Or perhaps he likes playing around with deformed archetypes and figures of authority, in between getting out his watercolours. It’s a heady mix and a pretty unique creative path to be treading.

In some ways he is a breath of fresh air. According to his interview in The Guardian he says making art is “easy”, and doesn’t bother having a studio, preferring to travel from place to place where he has commissioned different work to be done, while listening to Jimmy Hendrix in the car to psyche himself up before arriving and barking out orders or requests.

It’s a far cry from the scores of assistants employed by the big hitters in the UK art scene like Jake and Dinos Chapman and Damien Hurst, but then without all the media attention that such art stars command and indulge in, Schutte has time to do things the way he likes, even if that means watching the cows out of the car window as Hendrix rips into All along the Watchtower.