On Saturday the 13th October I was at the cork street breakfast and found out that the rumors to the threat of Cork Street were true. There is already online a petition that one can sign up to in support to stop developers from changing the face of Cork Street with the loss of eleven galleries from both sides of the street. (Please refer to the link below). 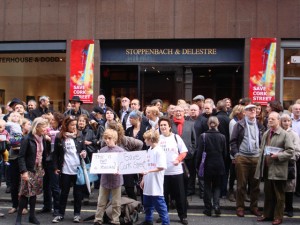 There was a leaflet provided with more information which I picked up to read. It brings to light a historical relevance to the place that not many streets can boast. In the early days The Mayor gallery was the first that opened its doors in this location back in 1925. Later followed by the Redfern Gallery in 1936 and Peggy Guggenheim opened Guggenheim Jeune in 1938. This gallery became a meeting place of abstract, surrealist artists and writers.

The street has brought many of the most well known artists here. Matisse’s Red studio was displayed at the Redfern gallery inspiring Patrick Heron. The careers of many British artists have been spawned here many of whose works can be seen at many leading galleries around the world like the Tate gallery. Francis Bacon, Barbara Hepworth to name but a few.

The British Insurance firm Standard Life Investments is in the final stages of a £90 million deal with Native Land who plan to demolish numbers 22-27 to build Luxury flats. Also The Pollen Estate the opposite side of the street plans to redevelop numbers 5-9.

To me it could pretty well be the last gallery breakfast that will be seen in Cork Street. The chances of changing the minds of Westminster council are slim. Once developers decide to make these sorts of changes they usually get there way because of the financial backing they have.

The worse thing is these are the sorts of flats that the government have been encouraging rich people from around the world to come and invest in. Not enabling the local population to stay but pushing them out of the city because they cannot afford to stay. Making ghost towns is not a good idea in a city. Cornwall has been damaged by this sort of ethos. Local inhabitants have not been unable to afford to buy and they have been pushed out and good homes have been bought as holiday homes making towns dead of people for most of the year.

Like all developers dreams; what ends up happening is making places banal, and dead, not encompassing the very spirit and cultural aspects a community requires. The usual mind set of people who don’t care. Look at Milton Keynes built in 1967 without any thought to a heart, community or historical centre, and culture. They built and left the people that moved in to a dead zone. It was the community itself that set about trying to build up something.

It makes one wanting to knock heads. Some common sense is needed and a more overall town planning strategy and system that is called for, to be managed by London as a whole not by individual councils. Removing high rise buildings making fields, and low builds mixed. Keeping the eclectic; interesting places like Cork Street. Not just protecting them enhancing them. Thinking more about the ways the local and business population can afford to manage. The media say it is the internet that is killing off small businesses. I say this is not the case. High rents and the high price of business rates is killing them off but more importantly developers and multinational companies are brushing aside many small businesses so they can add to their bigger pot of gold.

This represents a bigger fight that needs to be addressed and if Cork Street wishes to do battle it must find other groups of business around London undergoing the same sorts of problems. Join together and take the issue to the highest courts in the Land and do battle with government and the civil servant cronies who stand in the way of protecting the rights of the little man. So much for individualism and human rights which lawyers seem quite ready to talk about but when it comes down to it they stand back and allow large companies to put the boot in.