The Bond franchise gets shaken not stirred, in a heady cocktail of macho action and post-Freudian navel gazing.

Bond drops into the National Gallery to get in touch with his sensitive side during a scene in Skyfall.

As an art form the Bond franchise has a unique place in the public consciousness. Fifty years and counting it is the longest film franchise ever, and after Harry Potter, is the most profitable.

It’s a staple diet of high-octane chase sequences, comic book spy gadgets, Bond girls that say ‘yes’ at the shake of a martini, and larger-than-life baddies who always get their come-uppance. 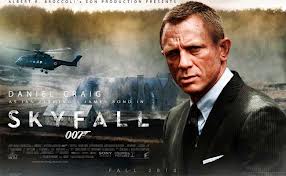 It is of course trading on nostalgia, which is no bad thing if you like your action predictably satisfying . But the fictional Bond of Ian Fleming’s books was born in 1920, and although the storyline is updated, the Bond franchise has made little attempt to move beyond the anachronistic image of MI6 agents with ‘a license to kill’ in the name of protecting British interests. Isn’t that the sole preserve of the Russians nowadays?

British flags and images of the establishment vye for attention alongside product placement in abundance. You could be forgiven for thinking the film was co-funded by Sony and the British Tourist Board.

But these days the franchise also has a young pretender, The Bourne Film series, biting repeatedly at its heels. Some even believe that The Bourne films have led to a grittier, more realistic look to the last two Bond films. Flattery indeed for the newcomer.

The writers of Skyfall therefore had a tough call. Which aspects of the franchise to bend and play around with without losing the hardcore fans, and which to update to make the film look current and contemporary.

Perhaps predictably they have gone both ways: 50 per cent contemporary touches, 50 per cent nostalgic backwards-looking references and plot devices. The result is a fun and fast-moving film, but in the process they have slightly lost the essence of all great films – a great story.

The result is a film whose narrative spins on an incongruous axis: the competition between two surrogate sons for ‘M’ – the boss of MI6 (played by Judi Dench). Daniel Craig as Bond is one of those sons, the other is the new baddie, ex-agent Raoul Silva (Javier Bardem) who feels betrayed by M due to an agent swap that saw him handed to the Chinese.

The film begins with our introduction to the sub-plot. MI6 has messed up and a database containing the details of all undercover NATO agents is in the hands of an unknown agent/organization now being pursued by Bond, with the assistance of new black bond girl, Eve (Naomi Harris). Cue a car chase through an Istanbul market, then a chase on motorbikes across rooftops, followed by a bizarre but spectacular fight sequence on the top of a train which includes Bond ripping half the train apart with an giant digger. But defeat is grabbed from the jaws of success as Bond is shot in error by Eve (under orders from M who considers it worth taking the risk of a shot) when Bond tangles with his target on top of the train. He finally falls into a deep ravine and is presumed dead by MI6.

This five minutes or so of ninety-mile an hour action takes you into the obligatory and glorious semi-animated credits, a cinematic cliche in its own right, bought nicely up-to-date with Adele singing the eponymous sound track.

Director Sam Mendez (of American Beauty fame) predictably sees this as an opportunity to slow things down and get into the psychological dimension of the film. M is shown somewhat guilt-ridden by the supposed death of Bond and unsure which way to turn as she is then harassed by a hacker who suggests in online messages that she must consider her past actions (this we later learn is our new baddie ex-agent turner hacker, Silva). To make matters worse the hacker successfully detonates a bomb inside the MI6 building. Clearly something is rotten in the state of Denmark, or perhaps Vauxhall.

Cue Bond returning from the dead and confronting M in her apartment. She cannot hide her pleasure to see him alive, but Bond is troubled by his experience (remember the psychological dimension), fails his tests for active duty, but against protocol is put back into ‘the field’ by M who shows she is not averse to bending the rules for her favourite agent.

As if to tick all the right boxes it is now time for Bond’s time-honoured skills of shagging, fighting, and escaping from tight situations, while winning large amounts of money at a casino.

So Bond is dispatched to Shanghai (hello Chinese cinema goers) where he catches the villain from the opening sequence in the process of assassinating an art buyer high up in one of Shanghai’s steel and glass monolith skyscrapers. Unfortunately he is unable to get him to reveal who he works for and fails to prevent him from dropping to his death after the obligatory fight on top of a lift shaft.

Then Bond visits a casino to meet a gorgeous femme fatale who he believes can give her access to Mr Big. She gives him the run around but is impressed by his observational skills as he susses out from her tattoo that she is a former sex slave in the pay of Mr Big who would give anything to be released from his clutches. He offers to save her by killing Mr Big. She obviously can’t be trusted but in a rather lame plot twist appears to be won over by his one minute chat up line and agrees to cooperate if he can make it out of the casino in one piece.

Naturally he gets in a scrape as the way out is barred by three thuggish bouncers. But he’s James Bond and they are no match for his punches, kicks and devious ways of getting them distracted as some captive Komodo Dragons tear bits out of their legs.

Now at long last we meet Mr Big, the real baddie. He’s holed up on a Mediterranean island that looks as welcoming as Beirut on a bad day. Bond makes his way there with his new best friend from the casino, but is captured on arrival. Mr Big (Silva) hangs out in a huge room with enough computers (shown with their gizzards of cabling hanging out) to bring down the Pentagon and he teases the now captive Bond with a soliloquy that details how he wants to kill M but rather fancies Bond – he strokes Bonds face and legs in one particularly irritating scene.

Bond escapes back to London only to find that M is having to face a Government inquiry of sorts over their recent failure to protect NATO agents, while Silva is making his way with a gang of henchmen to gatecrash the inquiry and shoot M and anyone else who happens to be there.

Spoiler alert. If you haven’t seen the film yet stop now – and come back later.

Bond manages to remove M from the proceedings (not before half of those attending have been shot by the psychopathic Silva. Then in a totally skittish back-flip of the narrative he decides to take her back to his childhood home, a craggy empty country mansion in Glencoe. But he has a plan. He wants Silva to find them there and to have the mother of all shootouts, so he gets Q to leave an electronic trail to lead Silva there. In a complete homage to earlier Bonds’ he drives there in the Aston Martin DB5 immortalized in Goldfinger.

Cue the denouement. Lots (and lots, and lots) of gun action and scenes of derring-do culminate in a military chopper exploding into the mansion, leaving our heroes to exit left to a chapel via a secret corridor. Ultimately Silva fails in his mission and Bond saves M from Silva’s final attempt to kill her by throwing a knife in his back, only to find that M dies in his hands due to an injury sustained earlier.

The film is beautifully crafted by cinema-photographer Roger Deakin, but like Quantum of Solace the storyline leaves a lot to be desired. The writers have doffed their caps to modernity by making Moneypenny a feisty black woman, setting some scenes in China, and making data loss and hacking the big issues of the day. But none of this matters very much and when you take these elements away you are left with another tacky attempt to dig into Bond’s emotional landscape (lost his parents when he was young, hated living in the gloomy Glencoe mansion, has issues with M).

You can’t help thinking that the emotional complexity portrayed in the Bourne Film series has prompted some studio exec at the Bond franchise to shout: ‘Show me some emotion. What’s Bond’s motivation?’

As a result of all this psychological piffle we are short-changed on the baddie in this year’s offering. Bardem is a great choice for his much loved role as Anton Chigurh in No Country for Old Men, but how much do we care about a baddie that can’t forgive his surrogate mum for sacrificing him for the greater good? Bardem was reportedly a bit Luke-warm on taking the part and was only persuaded to take it in return for a degree of freedom in crafting his character. But it hasn’t really worked. Mummy’s boy hackers with a chip on their shoulder just aren’t that interesting. Maybe its Bardem’s fault but I suspect he really had his hands tied with the nature of the character.

So we are left to just enjoy the girls (not nearly enough), the cars (the retro Aston Martin’s return is a great touch), the suits (Bond looks great as ever), the fights (beautifully crafted) and the warm feeling that you get from knowing our man wins – despite his personal issues.

As an art form Bond is past its prime, and is shoehorning itself into the 21st century, but film being somewhat a slave to new technology these days means that if you do what people expect really well, they will forgive you for having a narrative that is simply there to join the dots between the sumptuous action scenes.

The Bond franchise is a soap opera of epic proportions and we all know that soap operas increasingly become parodies of themselves until they stretch credulity so far they fall off a narrative cliff. It could well be that The Bourne Film series took the torch of the secret agent genre, while Bond et al were busy losing data and sorting out their emotional issues. It’s no surprise that the modern era Bond films are only commercially viable as clothes horses for product placement.

Verdict: Mendez does a good job defribrilatting the Bond oeuvre back to life after a faltering Quantum of Solace