How do you paint the soul of a beautiful paino? When Steinway and Sons wanted someone to paint a grand piano they chose MIA – it’s not hard to see why. 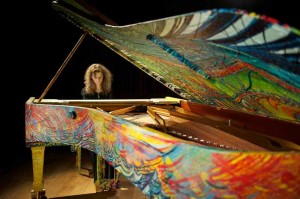 In 1917 Pablo Picasso designed Parade for the world-famous Ballets Russes. Parade was the first ballet to include cubism sets and costumes.

The Ballets Russes, directed by Sergei Diaghilev, was an itinerant ballet company from Russia which performed between 1909 and 1929.

The company is regarded by many as the finest ballet troupe of the twentieth century and its linkage of art and music is integral to its reputation.

That link continues to inform and inspire the work of Maria Ines Aguirre, better known simply as MIA, an Argentinian artist living in London since 1994.

Yellow House Blog was lucky enough to be invited to a select private view in Kensington of some twenty or so of her paintings and ceramic works, as well as a superbly crafted video that tells the story of how in 2010 she painted a Steinway Model D concert grand piano, titled Dancing Soul.

Without doubt MIA has a rare and exciting talent. Her abstract paintings are a life-affirming riot of colour. Sumptuous oranges and blues contrast and blend beautifully with greens and reds, sometimes intersected by sheering black criss-crossing lines.

The colour, emotion and spontaneity of the work makes your pulse race. One minute you’re under the searing heat of a Tucuman summer, the next you are gazing longingly at deep blues inspired by Venetian skies. You sense a blend of flowing deep waters, golden suns and Mediterranean climes. It’s a heady mix, that fills you with emotion.

But aside from her warm paintings and ceramic work, MIA is also dedicated to painting in three dimensions.

This has led to three wonderful works already seen in the UK:  an elephant for the 2010 London Elephant Parade which went on show in Kensington High Street – others were also  exhibited at Copenhagen airport and the centre of Milan in 2011.

Other works include a crocodile for the 2011 Jungle City exhibition in Edinburgh and two giant eggs for the 2012 Fabergé Big Egg Hunt in London, one appearing in London’s Oxford street. 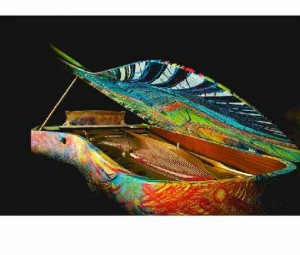 But it is her love of music and her desire to explore its symbiosis with abstract art that led her to accept the unique offer from Steinway and Sons to paint their iconic grand piano in situ at their London store, as passers-by watched in wonder.

For this work she commissioned Michael Harding to mix the paint (Harding is the choice of leading artists like David Hockney and Howard Hodgkin).

She says that she was given total freedom to paint as she wished and used some of her earlier paintings as starting points before embarking on painting the piano from top to bottom in a manner that she describes as evolving during the process. The end result is an abstract tour de force which dances before your eyes. It’s a veritable symphony of colour, with an entrancing, dreamy abstract narrative.

The esteemed art critic Edward Lucie-Smith writing of the work said: “The colours and forms she has discovered to clothe this superb instrument express the soul of the music that is performed on it. Rather than looking for ways to decorate an instrument, as most of her predecessors have done, she has looked for ways to express its inner spirit.”

Judging by photos and the video of the work (I expect to actually view it at Steinway and Sons later this month) it is one of the finest meldings of a musical instrument and artwork you are ever likely to see. To view an instrument painted with real style and verve is a rare thing, but to see a beautiful Steinway painted in such a way makes you literally want to dance and sing. Purists may not want to see a painted Steinway, but most will agree that MIA has created something of a work of pure joy with this superlative addition to her growing body of three-imensional work.

Maria Ines Aguirre (MIA) studied Fine Art at the university of Tucumán (Argentina) and the Accademia di Belle Arti in Venice and naturally those geographical and cultural influences shine through her work.

She has exhibited widely in the UK, Italy, Spain and Argentina and her works are held in collections worldwide.

If you love the sound of a Steinway Model D concert grand, and your penchant is for abstract art that is colourful, soulful and energetic, then you have to make the pilgrimage to see this work and see MIA’s other work. Be quick though, as it is likely to be sold to a private owner soon and may not be seen in public again.