It has been a while since I saw a show of ceramics so I thought it a good idea to go to a group show of renowned British Studio potters; Simon Carroll, Walter Keeler, Janet Leach, Katharine Pleydell-Bouverie, Julian Stair at the Corvi-Mora gallery. The gallery is just off the Kennington Road round the corner from the Imperial War Museum which is due to re-open in July after refurbishment. It is not necessarily the easiest place to find if you have not been there before but it is worth the effort.

The place itself seems to remind me of a studio complex but it is far too clean for that. Up the stairs to the Corvi-Mora (not ideal for disabled) I found the show in a small space. I do not know all too much about ceramics but there seemed to be a mixture of contemporary functional pottery to those that are not. It was a good show the group all brought an element of craft but at a same time one can see that these are not objects one can readily buy anywhere. There is a certain feel about them that makes the word craft seem to be the wrong word to use.

The pottery was presented on simply plinths as one may present sculptures and a relationship here between the ideas of what art or craft is. From general observations this seems to be something that is being explored at the moment in these circles. I always thought there seemed to be a kind of snobbery about the craft movement from certain sectors of the fine art establishment that I find difficult to understand because the artists tend to come from the same schooling establishments. 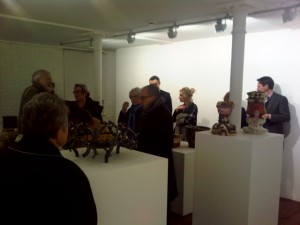 Why is there this divide any way because there is so much in common in so many ways? The exploration to develop something in ceramics is probably far more difficult because of the centuries of history behind it. The functional use as a container to the general public at large who will most likely not perceive pottery as art. The Bauhaus proposed ‘form follows function’. Would one say that the Bauhaus was about craft or art? If one looks more closely at the literature written about the Bauhaus it is considered to be a contemporary art design movement of its time which had painters like Paul Klee and Wassily Kandinsky teaching but many of the objects produced were things one could use in every day life.

At the same time one can relate to why people from a fine art background would probably say and feel that pottery has its own place and has no relationship to the act of say painting a canvas like Jean-Antoine Watteau.

Pottery is only pottery, the craftsman stuff of the kitchen and the cabinet of curiosities, and never to be put on a level with Raphael and Titian. One might well preserve pickled herrings in a Perry pot, drown a Duke of Clarence or even pee in it – none of which things can be done with Michelangelo’s David or Rembrandt’s Samson and Delilah; indeed, the very uselessness of a narrative painted on canvas in a frame, or a block of marble carved into the image of a naked hobbledehoy, is the simplest of all distinctions between art and craft. [page 333, Naked Emperors, Brian Sewell Criticisms of English Contemporary Art. 2012]

Brian Sewell talking about one of Grayson Perry’s recent shows puts a firm thought on this point. In some ways painting may be just useless narratives in today’s climate but in their time many churches used them to visualize the ideas of Christianity to the illiterate; as well as being a way to express wealth by the rich, is this not functional?

For me its straight forward but if your a potter who sees one self as artist I am pleased for you but may be it all boils down to what you want from the object in question.

I would advise anyone who is interested in Ceramics to go and enjoy. You will also find another gallery there to visit and there are some good pubs around about to go to afterwards. The show is running from 11th January to the 23Rd February 2013

Later outside it was a pleasant cold evening and hot lentil soup and bread was available for those who wished to par take and beer for those who preferred the alcohol. I have to say the soup was great and went down a treat with the bread and cheese.