The Uamo Arts Festival has only been around for a few years but it seems to have struck a chord, bringing together many artists into groups shows or happenings around the globe. Last year South Korea, Bulgaria, Switzerland, Austria, Brasil, Armenia; all had shows under the festivals banner which has continued into the early part of this year in Spain and London with the final show to be in Munich, Germany in February. 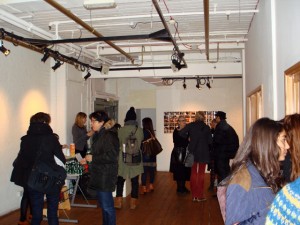 Uamo is a non–profit organisation as ‘a platform for artists and art of all types’. They annually organises a four day art festival in the city of Munich. Since 2011 known as ‘the city tour’ the festival has begun to spread to cities around the globe. Linking up via Skype to interview artists with their work meanwhile the events are projected so people in Munich can see the event.  This time the theme was based on ‘playtime’ and artists were asked to respond to this. In London the show had eight artists Lilly Cavanna, Hanna ten Doornkaat, Jonathan Gershon, Christiane Haag, Laura Haag, Ieva Makselyte, Yash Mali and Mona Neuhauss. Curated by Christiane Haag and Eva Branscome. 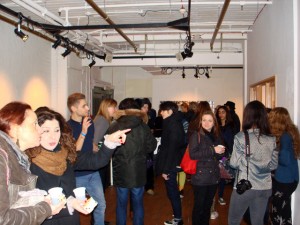 The event took place in the Signals Gallery in the East End of London. The artists’ response to the theme varied, showing works as prints, photography, video, performance, installation and food.  All the art had different reasoning and as a show worked very well. The space itself had smaller rooms off the main hall which provided artists ample room to hang work. It meant the artists intentions for their work came across more clearly. The opening night was on Thursday 17th and it finished on the Saturday 19th January.  It was a shame the show did not go on for a longer period but this is the nature of a festival.  Those who made the preview event on a wintery evening all had a good time and enjoyed the show. The event did have people visit for the next few days despite the snowy weather and the London Art Fair being on. All round it seemed to be a great success. We look forward to Uamos’ next event in London.