This was a beautiful experience. The performance entailed a collage of mechanical type sounds made from fans, marbles, metallic objects, glass, boxes, batteries. Noises made by toy like small sculptures simply placed together randomly and connected to a battery. 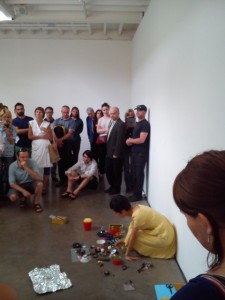 There seemed to me rhythms in beat that were continual, repetitive noises made by different obscure objects. Later near the end of the performance balloons attached to tin foil were dropped from a low roof which were dragged by the breeze adding another layer of noise and colour. Junko Wada performed a style best described as tempera or as if a watercolour blending together between these collaged sounds and colour made by Yui and Nakajima.

The performance although artistic in style had no contemporary dance influence or should I say element. Some how the sounds countered the performance well in reflection despite the lack of dance movements. The cultural aspect seemed partly more to come from the sounds. The performance itself did not appear to have any Japanese cultural influences that one could tell.

Don’t mis-understand me it was a enjoyable experience although one felt the cherry needed a few more friends. To really to set this off. One can see that the more they perform this the better it will be with more development and thought to push it to the cliff edge. They are definitely on to something that could be raised to another level of professionalism that people may pay a lot of money to see. 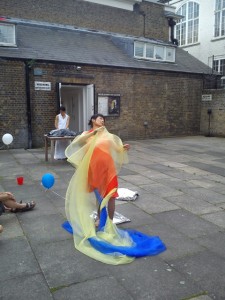