Did you spot the work?

During August an audacious plan to put artwork onto thousands of billboards finally came to fruition.

Showcasing great British art across the UK, Art Everywhere was the largest exhibition of its kind in the world. From the 12–25 August 2013 some of the nation’s greatest art was on display across 22,000 poster sites and billboards up and down the country. Artists, curators, media owners and entrepreneurs joined by a love of art have fuelled this massive charitable celebration, and the general public crowd-funded over £35,000 to help make it happen.

Here’s one I saw on the underground somewhere central, I think perhaps Green Park. 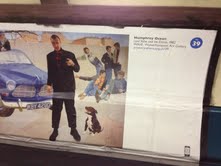 Art Everywhere is the brainchild of Richard Reed, co-founder of Innocent Drinks. You have to hand it to him for taking a great idea and actually making it happen. Here he is talking about it when he was seeking to raise the funding for printing the posters. Amazingly he only needed to raise £35,000. The rest was all about talking to the ad industry and getting people to help for free. Fantastic.

And here is a video from Euronews showing what people said on the day of the launch on 13th August. Sadly the works only appeared for two weeks, but in some locations that may be longer.