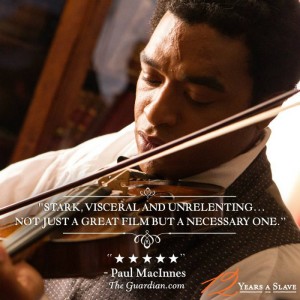 There’s a lot of buzz about this film, and it’s not difficult to see why.
- It shines yet more light on a dark and largely unspoken area of history.
- It is yet another sign that Steve McQueen is blurring the lines between being an artist and a film maker.
- It is one of the most moving, disturbing films you will ever see.
Those reasons alone will make nearly everyone want to see it, and nearly all will ‘enjoy’ it.
In a nutshell, it’s the story of an educated, ‘free’, black man living in Saratota Springs, New York, in the 1840s. He has a family, a nice home and is an accomplished musician. He is lured to work in another town, kidnapped and taken to be sold into slavery in New Orleans. His captors rename him, pretending he is a missing slave – a shocking practice that was not uncommon at the time. What follows is predictable on a general level in that your know it isn’t going to be a walk in the park, and you know from the title how long this entrapment is gong to last. What you don’t know is the depths he has to go to to survive and the levels to which his new masters sink in the mistaken belief (mainly based on personal profit but also wrapped in misplaced religious beliefs) that they can treat other men as their inferiors.
So far so bad.
The film carries extra weight because it is based on the true story of Solomon Northup, one of the few black men to record his experience as a slave into a book that became he
a bestseller in the 1850s.
What McQueen brings to the party is an ability to weave ambiguities into the unfolding drama. The central question is always there as ‘How could they have done this’? But there is also the depiction of the reality that some slaves became complicit with their masters just to survive, perhaps prolonging the era of slave use even longer. But who can blame them? Like any survival story it is about heroism (our lead character is exemplary) but it is also about what men do to survive.
McQueen loves long languorous shots that draw you in, be they tracking shots or slow pans. You sense a painterly consciousness pervading his film making. He has also become a master at depicting mental and physical pain on screen. His previous films, Hunger (about the hunger striker Bobby Sands, and Shame, about sex addiction) were full of shocking scenes of violence and self harm.
Due to his ability to drip feed us with scenes of shocking inhumanity, McQueen has succeeded in making the defining film on slavery. Others are now likely to follow but perhaps none will have the seismic impact on your very being that this film does.
Predictably there is little to feel good about in 12 Years a Slave, particularly for a white audience. The ‘sins of the fathers’ phrase hangs in the air as you leave the cinema and walk down the street. Cities like Liverpool were built on the slave trade, this isn’t just a film about American slavery. It makes you think long and hard about the debate around reparations that has been voiced in the USA yet gets so little airtime here.
You also can’t help wondering how much we all rely on modern slavery in countries far enough away for us to ignore.
But the film is not a polemic. At heart it’s just McQueen and his band of merry men saying ‘Look at this; this stuff happened, and look….. this happened too’. If we know our history we shouldn’t be surprised, but we don’t (at least most of us), and we are.
In interviews McQueen said he had wanted to make a film about slavery for a long time, so as much as anything this is the final realisation of a long held dream to tell the story which he felt hadn’t really been told.
It was his wife that suggested he look at Northup’s book, which then became the basis for the film. That in itself is a very moving thought. There was this slave, 170 years ago, at times risking his life to write his story, and now finally it is being heard and seen cinematically by millions, even perhaps billions eventually. If that isn’t a demonstration of the power of the pen and the wonder of dreams I don’t know what is.
McQueen in fact picks up on this with a scene in the film where we see Northup’s character trying to secretly write using berry juice. He fails but of course we know he didn’t give up. Perhaps at a humble level this scene is also the story of every artist – he struggles to communicate but if he can persevere, the consequences can be profound. It’s melodramatic but all artists know the spectre of loneliness and desolation that can haunt the act of creation.
If the job of an artist is to entertain and inform and to communicate about matters of importance to us all, McQueen has triple ticked all the boxes. He has also mastered the art of getting fine performances from actors – no mean feat.
It will be interesting to see where he goes from here, particularly if the film wins a hatful of oscars as is expected. A Turner prize next to an Oscar on the mantlepiece will look very nice, I’m sure.