Just a hop and a skip from Nottingham town centre is the city’s vibrant Contemporary art gallery, with its welcoming foyer, cafe and large gallery spaces. 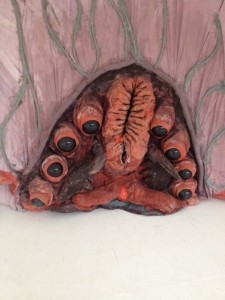 This is the Brainbug. Is it me or does it look like something else?

Two shows are currently running: The performance artist Marvin Gaye Chetwynd (formerly Spartacus Chetwynd), and Los Angeles-based Iranian Tala Madini. Chetwynd is best-known for being a finalist in the 2012 Turner Prize, and Madini for her somewhat disturbing depictions of male authority and machismo.

Lets’s look at the wonderful world of Chetwynd first.

A word of warning. This work is not for the art purists. It is deliberately scatalogical and anarchic. 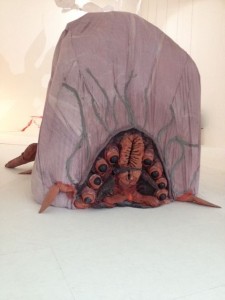 This is the first ever solo exhibition of Marvin Gaye Chetwynd, consisting of selection of recent works around two large scale ‘performative’ sculptures: a tent-sized Brainbug, leader of the bug colony in the film Starship Troopers. This is accompanied by a series of scaled-down dioramas of film sets, and the grinning Catbus from the 1988 Japanese animated film My Neighbour Totoro. The Catbus converts into a video lounge that visitors can enter and use.
There is also a selection of paintings from Chetwynd’s Bat Opera series featuring portraits of individual bats in a heroic 18th century manner. Others are Romantic landscapes of swarms of bats rising from caves and ruins.
The extraordinarily hairy Cousin Itt, of Addams Family fame – essentially a woman with hair down to her calves – hosts the exhibition, making rapid, indecipherable bleeps, and hovering around visitors in a friendly but but unnerving manner.

Chetwynd’s world is made up of amateurish objects relating to and embellishing on characters and objects in sic-fi B movies. She creates a world of strange creatures and peoples it with participants dressed in B movie chic attire of increasingly weird design. But there is always a purpose to all this creation as everything that is on show is used multiple times in performances that entrance and involve the public. Cyhetwynd’s world is that of the kind of performance art that has been until recently shunned by most mainstream galleries.

But times are a-changing, and performance artists are now known simply as artists and Chetwynd has the distinction of being the first such artist to be nominated for the Turner Prize, a considerable achievement.

What is clear is that if you can suspend your art pretensions there is a lot to enjoy in the work, or in the performances (judging by the videos on show).

The media pack sums up the approach to the work well:

“Chetwynd’s sculptures and installations often start as handmade props, costumes and sets for her joyful, anarchic performances. They acquire an afterlife in exhibition spaces, occasionally animated by amateur actors and professional dancers. Sometimes they are free to scream and squeal as if partaking in a group therapy session.

“Chetwynd is influenced by popular performing traditions such as medieval mummer plays, carnivals, communes, drag acts and political demonstrations, as well as the history of performance in avant-garde art. She is at home with the classics and with popular culture – and she uses one to give new meaning to the other. Her performances have referred to the ideas, images and storylines of Giotto, John Milton, Charles Dickens, Karl Marx and Dante, for example, but also Meatloaf, The Addams Family, Star Wars and Starship Troopers.”

So Chetwynd’s work is a wonderful mix of am-dram schlock and art world pretention, blended with a healthy measure hippy-trippy sensibility, that verges on a campaign to bring back the late 1960s. You can’t be a hippy anymore but you can volunteer to be a performer in a Chetwynd production, nudity optional. Happy days!

Not surprisingly kids visiting the show seem enchanted on the whole, even if some of the objects would give Freud a field day. An art insider informed me that such performance work is much in demand by galleries nowadays as it attracts kids and their parents swelling visitor numbers beyond levels achieved by more run of the mill work.

So what about the performances? Based on seeing one during the Turner Prize, and a few others on video at this exhibition and on YouTube, they are characterised by ‘happenings’ where faux ritualistic activity occurs in various areas of the space in which onlookers intermingle with performers while attempting to interpret some narrative or meaning. Performers typically move slowly and purposely but the activity, though often collective and rehearsed is often ultimately obscure.

It might be seen as boring but there is enough weirdness and sincerity in the performances individually and collectively to entrance most onlookers. A slash of nudity her and there keeps pulses racing every now and again too. Themes touched on include state of democracy, gender politics and personal debt.

Western society probably needs more Chetwynds, but in a post-post-modern age, silliness and fun are seen as the preserve of teens and immature dope smokers. More’s the pity. The work is also wonderfully uncommercial – somewhat refreshing in a week when a Francis Bacon’s ‘George Dyer Talking’ painting sold for a ridiculous £42 million. I’m sure a Mayfair dealer is dreaming of ways of commoditising Chetwynd’s work right now, but it sure won’t be as easy as getting DHL to take a Bacon original down to Christies for the day’s auction. On the other hand, if he can get the V&A to run an exhibition of performance art costumery…….

On the downside critics make the serious claim that Chetwynd’s work is plagiaristic. The Catbus for example is someone else’s copyright as are the characters from Starship Troopers. Taxi to the lawyers for Chetwynd!

Hopefully such niceties will not put an intergalactic spanner in the works of the wonderful world of MGC.

Marvin Gaye Chetwynd was born in London in 1973 and now lives in Glasgow. Last year she was known as Spartacus Chetwynd. What’s in a name anyway?

Despite Chetwynds work being very child-friendly (sort of), the work in the next gallery carries a health warning given on a sign that says that some of the images may be disturbing etc. At times like this you feel for the parents who wonder in unthinkingly and have to answer the natural questions as in “what’s that Mummy?”. The correct answer may be “Er….I think it’s shit/vomit/some form of torture.”

Madini’s work is not for the faint-hearted that’s for sure.

Tehran-born Tala Madini, 32, makes large and small paintings and animations that are figurative and symbolic in nature. Her subjects of interest are masculinity, group dynamics, sexuality and power play. There is an aggression and a degree of depravity in the work in that bodily functions are a constant theme. The colours are subdued yet carefully chosen to contrast subject and background.

Although brought up in the USA the work appears to have a strong emphasis on human relations in Iran’s totalitarian regime or a particularly repressive environment. Subjects are almost exclusively middle-aged men sporting the characteric middle-eastern moustache, in various forms of relationship to each other or to their or others excretions of one form or another.

Her entry on Wikipedia states: “Her painting style is loose, incorporating gestural brushstrokes into figurative narrative scenes that often have a bizarre, fetishistic quality to them. The men in her paintings often appear to be ridiculed, clownish, dominated by perfumated space, Brechtian. The loose brushstrokes and flat pictorial space give an almost cartoon quality to her paintings.

What I would add to that is that the work looks like it is executed fairly quickly as if catching a sequence of a dream or when the inspiration arrives. It has elements of the styles of arte povera and naive art. It is almost child-like and intensely emotional by virtue of its rough and ready look.

In a recent interview she describes drawing: “Drawing is very useful in getting what’s in the brain out and the painting is already a bit more mediated with it’s process, simply because there are a few more steps to it. I try to change those steps a bit to make it as immediate as the pencil.

“I try to make the brush behave like the pencil, I make immediate, very flat paintings…they speak to the history of painting before the use of perspective. There is more of a narrative in my smaller works. The large works can’t be heavy, they have nowhere to land, they have to be simmering. The colours can really become a place where you feel safe to enter but then other things creep up to you. Colour can be psychological; it’s your first impression. It should be very intense and welcoming. ”

“In general I try to access a childish access in the colour, kindergarden colours…and then see what comes out. I moved to a studio but I could not stay put in the studio so I started to do something that requires thinking and doing so I tried animation. I didn’t want it to explain too much but I wanted it to show different kind of humour; the animations can go to places the paintings can’t. This was very exciting to me.

“I really laugh when I paint. I see that as a good sign. It’s not always funny laughter, sometimes it’s a burst of energy.”

What is clear is that Tala is a woman haunted by her images of men debasing themselves through forms of mutual entrapment, be they scenes related to institutionalised indignity or in more social competitive settings. She deliberately leaves the narratives opaque perhaps to reach to a deeper level of emotionality within the work. She does not wish the details of a work to obstruct the message of what she feels about what is occurring, and how it is debasing those involved. 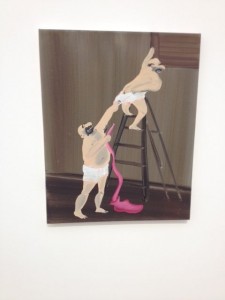 Perhaps the strength of the work is this very nightmarish quality that prevents us from putting a finger on what we are experiencing.

The work as a result is disturbing and unpleasant, and not the sort of thing you will see in a doctor’s surgery any time soon.

The gallery blurb details another set of work included which used children’s books as a starting point:

“In addition to such work, a new series of works feature children from a traditional learn to read series, books that reflect the conservative gender roles of the 50s. As a teenager newly arrived in the United States, Madani herself used them to learn English. The children appear alongside Madani’s little men who can be good or evil. The original illustrations of the children’s ordered existence are subverted by their anarchic actions. 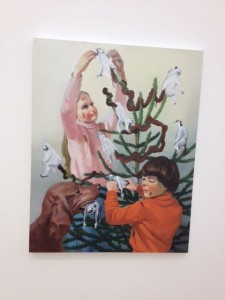