The KCC does what you would expect for a Korean-government funded operation – host all manner of events that promote Korean culture. The good news is that much of what they promote is by living artists who you can meet and exchange ideas with.

Korea is not a big powerhouse in the arts – yet – which makes it all the more approachable and unassuming. Something of a refreshing change if you are more familiar with attending events at the likes of Saatchi and Christies. With respect, most Europeans don’t know that Korea is already a force to be reckoned with in Asian TV and pop music – its soap operas are watched by scores of millions across Asia and its bubblegum pop, K-POP, is a multi-billion dollar industry which sets teen pulses racing in Japan and China. UK readers will remember well the invasion of Gangnam Style – a K-POP spin-off – in the UK charts just under two years ago.

Last week’s charmingly named ‘Artist Talk Party’ was a bit of a fashion love-in, with a one hour sit-down panel discussion, followed by a mini fashion show amid generous amounts of wine and nibbles. The event was chaired by Samantha Conti, Women’s Wear Daily, and included Korean designers Rejina Pyo, Hyein Seo and Edeline Lee. The discussion looked at aspects of being a Korean designer in the UK, from business to creative issues. (For more details click on the invite above.) 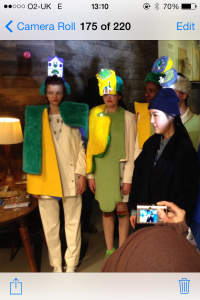 Part of the fashion show at the Korean Cultural Centre

The event was well attended, well run, and an insight into how Korean designers are growing in confidence as the global world of fashion brings Asian and European approaches to fashion ever closer together. Fashion insiders confirmed what everyone suspected: Europe loves Korean designer’s work ethic and East/West sensibilitie. Meanwhile Asian consumers are getting ever more savvy about where and how to buy cheap Western fashions, combining online buying with trips to European shops in big Korean cities and travel and study trips to the UK to stock up on the latest fashions or to buy in bulk for friends and family.

Eat your heart out Paris and Milan. The new Seoul-London fashion axis is alive and kicking and making its mark in hundreds of different ways; from high-level designer clothing to gritty, quirky and fun-loving urban styles.

Never has there been so much Korean creativity on these shores, and long may it continue and grow. It is a perfect example of two cultures that will benefit massively from cross-fertilising their artistic and technical DNA.

Here are a couple of videos of the event – apologies for the bad sound at the beginning of the first, but they give you an idea of the event at least. The first is of the panel discussion and the second is a mere snippet of the wonderful fashion show in the foyer of the KCC.

And here’s a load more videos about the KCC if you want to know more, notably one by Kim Cho Hee about the library at the KCC, which looks like an excellent resource for Korean Wave lovers.