I could almost hear the Cuban music playing in the background in the group show ’Concrete Cuba’ at the David Zwirner gallery in London. It was an enjoyable event in respect of the art and many their thought the same as people were concerned enough to go around the show and look closely at the art. 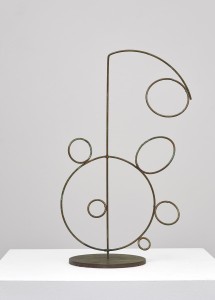 These Cuban artists of geometric abstract painting and sculpture came together as the group “Los Diez” brought together in part by common interests over short period of time. It occurred during the era when there was a political turmoil with nationalism riding high on a wave in the 1950’s.

They responded being exposed to the aesthetics and philosophies of the time when travelling abroad and returning with a mind not to engage in the politics and nationalism but to reflect the new ideas of what painting and sculpture should reflect being a more utopian aesthetic. In a way they were globalists seeing themselves possibly more than artists from a particular place.

The work performed were simple, adhering qualities of forms and colour that were not representational of anything particular. They offered a more worldly view in affect that was quite modernist and even projecting beyond this.