A centenary of art and Jewish activity in London the Ben Uri Gallery and Museum has established something unique as an interpretation of language or should I say ontology of the jewish community that has existed in Britain for the past hundred years. The show from Ben Uri’s collection is relevant to all but more importantly to those who made the art it gave them an identity, to remind themselves who they are and where they are from. 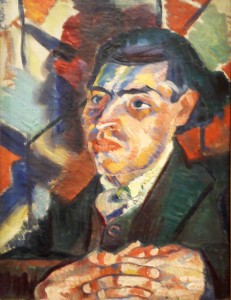 The artists and poets were also returning something as a record of their experiences but more importantly so you can identify with the peoples then and through time. The essence of daily practices and general life during two world wars can be felt. Many of the art works are beautifully executed of the highest standard and interesting to look at. Entrance is free to all and it is worth the effort to visit especially if you are in town.

The show is particularly poignant now with the tragic situation that is unfolding due to bad foreign policy by countries in the west resulting in mass migration, exodus of people escaping from war torn regions that have disintegrated. With this in mind the Ben Uri had already begun establishing a bigger vision to open itself too other communities that have experience of being migrants in a country that is not their own.

The Ben Uri is an entity that makes me proud of my cultural background although many people seem to find it difficult to understand the position of a family that has been forced to lose everything and start again in a place that is entirely foreign.  As my father’s family as Jews experienced just this with the break-up of India and the tragic violence that ensued in 1947 they had to leave everything and abandon their home in Karachi.

This goes to the very notion of what the Jewish identity has become looking for some where to settle in safety, although usually poor; keen to move forward and not look back, to build something that brings value to all wherever it may be.  This is what the Ben Uri to my mind stands for, it is an organisation that brings value that is willing to give more.