The Self
Marisa Lassnig was a painter (1919 – 2014) an Austrian by birth she painted in a period when the act of painting was starting to be seen as dead from the 1950s onwards. She worked in both abstract form and figurative, experimenting developing an idea of something that she wished to know about “self”. She was exploring the idea of being aware of one self and physical sensation that one has through the body.

Today painting like any art form is seen simply as a tool to inform and understand what one is trying to understand. In a way Maria must have been aware of this and it did not matter whether she painted or was conceptual artist. The act of painting was process that enabled her to explore something about what she found interesting. She was not concerned with the idea of technique or using historical painting to develop a new art work. In a way she had scratched all this to be more elevated.

In her later works she makes me think of a kind of personal therapy using gestures expressions in pastel muted sharp warm colours. The show is spread across two galleries and there is a clear progression in styles and development. I preferred her later work which is odd in that usually artists run out of steam in their later years whilst she seemed to have found herself. She had a clear idea of understanding about “self”.  The essence of being was found clearly which gave her an edge to explore without any pretentious forms but something that gave her a sense of rawness. 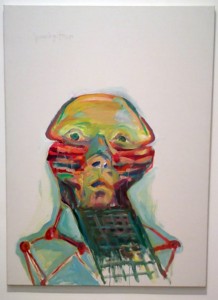