The show at the Pump House ‘Tipping Point’ a collaboration between the artists Pavla Sceranková and Lucia Sceranková was supported by the Ministry of Culture, Czech Republic and the Embassy of Slovakia in London.

The show had its merits and was well thought out I liked the art although I felt it was too polished it needed a bit of rawness to it may be drawings or something so that it did not feel like it was finished or out of a glossy magazine. The art work was a mixture of sculpture and printed images on all the floors of the pump house.

One of the sculptures was a construct of felt tip pens in a loose form of a body and a white medical coat was placed around the structure. The coloured ink felts that touched the cloth stained the jacket with a spectrum of colours. 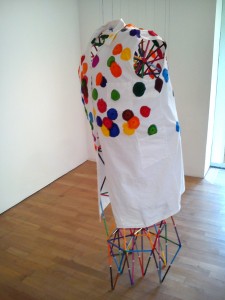 On the 2nd floor a print is on cloth hung on the wall and is pinned to make it look like it being pulled. In the picture printed on the cloth is a table cloth with cutlery, plates placed on a table that looks like it is being pulled from one corner of the table by someone. The interesting play reminds me a little of Dada, or Surrealism.

Another piece was a photograph of a pair of scissors cutting the paper and where the cut was the actual photograph had physically been cut which was interesting to see. Although the show did not pull any punches in some way I felt it did not need to be so complete; maybe I am being unfair because on the whole it was not a bad show. Pay a visit to the Pump house gallery in Battersea park and make your own mind up it will be a great day out. 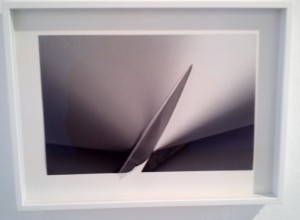