Baruchello’s paintings remind me of the illustrative nature of doodles the base form of drawing ones thoughts which could be spiritual or just random moods. His focus has emerged from a period of self awareness of abstract expressionism of the 1950s to a language influenced by ancient type cave drawings trying to describe something in a visual context. 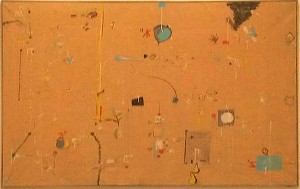 Almost like note taking there are mappings, drawings of body parts, textural references. With the failure of modernism to establish its self and society turning its back on the promises of utopian ideas that emerged during the war year’s; Artists looked to find a more post-contemporary way to motivate them to explore the ideas of democracy and capitalism. To find a new avenue to explore in a city of art. 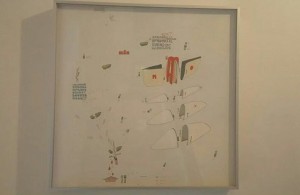 The painted white canvases are almost like pieces of paper to write down a poetic fragment of an idea that one reads in the papers or media. The disconnected doodles of a boy that may put off some people with iconography, symbols discarded over the surface. An old man playing with a toy never really growing up springs to mind but it is a more a sense of deliberate naivety that one finds in the streets or in the landscape of the city where one can be found bombarded with stuff that does not relate. Almost like an advertising gang bang that has merged and become meaningless textual facets in our lives. 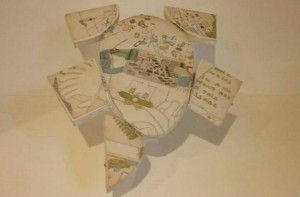 The utopian idea broken and the explosion of yet more promises through advertising and branding offering a greater ideal that can never really deliver as they are surface, materialist offerings to the Gods of money much of which ends up in corruption. This all falls into Baruchello’s aesthetic of the information age where all of these pieces of data are ephemeral then merged into a mash potato. All they need now is the meat and two veg.