I took a barbarian friend (who says he knows nothing about art) to Richard Jackson’s Art show at the Hauser and Wirth Gallery in Saville Row North, London.

I suspect he was only enticed by the free beer. But the show must have had an impact on him, because he keeps sending me random thoughts. He was dumbfounded on the night, but the images keep popping in and out of his brain at random times, through some sort of cerebral cat flap.

I will report his thought as they come filtering into my email inbox.

Thought One:
Dear Ken,
Thanks for taking me to that show.
I can’t get the thought of those men squirting paint out of their bottoms out of my mind. I’m worried about what that says about my sexuality.
I keep thinking about those men. It’s got to sting shooting pain out your bottom, for one thing.
They weren’t a very ethnically diverse group (the bottom painters). All uniform height and colour. Not that that matters. I don’t know why I brought it up now. Forget I said that or before long someone will call me a racist.
(Boy, that artist bloke knows how to start a controversy)

As for that lady on the photocopier… that was even more disturbing.. I was both terrifIed and turned on.
But I’ll talk about that later.

A host of white cones huddle in clusters cross a floor. It looks good, but what are we to make of it? The headline work of Phoebe Collings-James’ solo show at Camden’s Cob Gallery is 50 cones in all but no two the same, different sizes standing at different angles, all imperfect, their surfaces sometimes punctuated by random openings, as if they’d been smashed, giving a glimpse of the darkness within. It’s called oKoKoK and it might make you think of the Klu Klux Klan- indeed, their initials are in the title. Collings-James refers to them when explaining that her investigation ‘into falling, physical vertigo’ took on those shapes. Like KKK hoods, they suggest there’s something to hide, and ‘there’s a ridiculousness in them’, she says. Philip Guston saw the same thing in The Studio (1969), mocking himself as anti-hero in a white hood. But there’s yet more going on here, and we’ll come back to it. 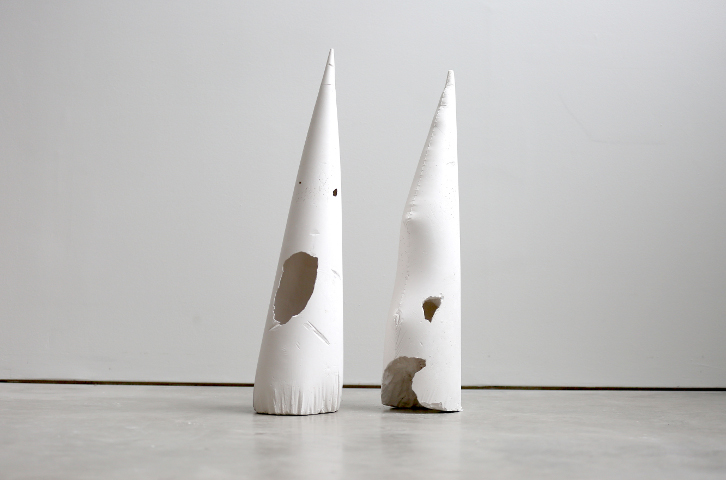 END_OF_DOCUMENT_TOKEN_TO_BE_REPLACED

Eye-contact on the Tube is a total no-no, unless you’re a looney or a foolish chancer fishing for love. So when a bloke with a moustache on the Bakerloo southbound platform, Oxford Circus, looked at me and held my gaze for more than the standard microsecond, it was odd. Of course, in London, you just pretend these things don’t happen, and you certainly don’t break step. Maybe he was a lost Mexican revolutionary dreaming of a tortilla (he sort of looked that way). Hurrying past him towards the Victoria Line, I notice a big photo poster of a man standing at Oxford Circus. Which is here. Hold on, he’s got a moustache… I know this guy!
END_OF_DOCUMENT_TOKEN_TO_BE_REPLACED

It isn’t easy to decide. For the visitor going through this exhibition two artifacts stand out as particularly poignant. It is hard to know which has the bigger pathos.

One is a small marble relief showing a temple being shaken by an earthquake. The image has an innocent simplicity. What it depicts is, of course, a prelude to the eruption of Vesuvius. But the artist and the citizens of Pompeii did not know to connect these early earthquakes with the catastrophe to come. They were a sign they recorded but could not read. END_OF_DOCUMENT_TOKEN_TO_BE_REPLACED

The chances are you’ve never heard of Mirano.

All right, he must mean Merano, some of you are thinking, the resort in the mountains close to Austria and the clever-clogs among you are no doubt thinking I mean Murano, the little island in the Venetian lagoon.  Well, I suppose I have to admit the clever-clogs aren’t too far off, but wrong for all that.  I do mean Mirano.

Mirano (VE), as it appears in more official documents, is a small town just a few miles into the Venetian hinterland.  From the bus terminal in Venice, one of the local orange buses will get you there in less than an hour.  You could also cycle in that time as the country is flat, a part of the plain that stretches behind Venice up to the foothills of the Alps.
END_OF_DOCUMENT_TOKEN_TO_BE_REPLACED