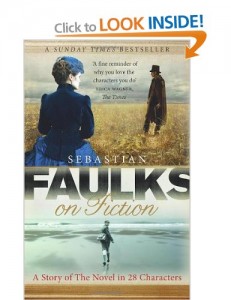 According to the great Wiki-thing, Artists’ books are “works of art realized in the form of a book, often published in small editions, though sometimes they are produced as one-of-a-kind objects referred to as “uniques”.”

“Artists’ books have employed a wide range of forms, including scrolls, fold-outs, concertinas or loose items contained in a box as well as bound printed sheet. Artists have been active in printing and book production for centuries, but the artist’s book is primarily a late 20th century form.”

So what can artists learn from experts in the literary form? I decided to check out Sebastian Faulks on Fiction – The secret life of the novel.
Sebastian Faulks, best known as author of Birdsong, and more recently Human Traces, has turned his hand to a careful consideration of the novel, as literary form. He is, not surprisingly something of an old sage on the matter having been a lover of the novel from an early age, then a student of English Literature, then a best-selling novellist.
But he distances himself from literary criticism, although he is happy to recognise the benefit of its 1960′s form: “I was raised on the ‘New Criticism’…although like all schools of crit it was eventually pushed too far, it offered an essentially sound way of approaching a novel.”
Of latter approaches taking in Marxism, psychoanalysis, and linguistics he is less praising: “…the ratio of insight to verbiage is discouraging after page two.”
He is also dissatisfied with the more recent approach of something called Biographical Criticism, suggesting that it creates an unnecessary connection between the life of a writer and his literary creation. He even seems to believe such an approach is an insult to the creative craft.
But what he abhors the most is the belief in some circles that you cannot say one work is better than another. What we have here is a celebration of 28 books that Faulks feels are some of the best, or maybe the best that anyone can read.
Not wanting to approach the matter like a literary critic he adopts a character based approach, looking across all the books, and celebrating characters under the categories of: Heroes, Lovers, Snobs, and Vilians.
In this way he superbly illuminates our understanding of the fictional giants, from Robinson Crusoe to Mr Darcy, from Constance Chatterly to Fagin.
The structure is best when we are able to share in Faulk’s passion for the work in question, but it is also an excellent way of being introduced to the 28 novels, many of which I ashamedly admit to not having read.
But if you don’t like spoilers, beware, they come thick and fast.
The book is a work of passion that shows you how classic literature has served us well in highlighting archetypes and how they predict future behaviour. It also show how the literary art form stands alone as a medium for doing this in a way that elicits the maximum creative input from the consumer. Few artists go so far as to write novels but no wonder artists so often stray into the form for their own purposes.

Gregor Muir, boss of the ICA, takes us down memory lane with a tale of the lucky, lucky YBAs, from spotty students to new artistocrats.

The shark that bit the art world on its bum. Gregor Muir recreates the time when Young British Art was the coolest thing since Warhol.

Most art history courses rarely go much beyond 1960, let alone 1985, so to know anything about what really happened in the decades leading up to the millennium you have to talk to those that were there, or read their books.

This is a recent contribution to the YBA literary oeuvre by someone who was definitely ‘there’, Gregor Muir, once art critic, now boss of the Institute of Contemporary Arts, via a stint as a curator at the Tate and more recently Director of Hauser and Wirth (London).

Muir should know a bit about what he is talking about. He was friends with many of the ‘names’: Tracy Emin, Sarah Lucas, Mat Collishaw, Damien Hirst, to name but a few. END_OF_DOCUMENT_TOKEN_TO_BE_REPLACED

In my twenties and early thirties I lived in South London. Through an artist friend I was introduced to Keith Coventry who mentioned a gallery he was co-running called City Racing. I liked the sound of it and went there once but sadly cannot remember much of it – we are talking 30 years ago and back then hardly anyone gave a toss about a small artist-run gallery called City Racing, me included. I bumped into Keith one more time at Damien Hirst’s group show at the Serpentine Gallery during that time and never saw him since, so I was pleased to find this book as it gave me a chance to put City Racing in perspective and to know a bit more about someone famous I met when they weren’t famous, as it were. END_OF_DOCUMENT_TOKEN_TO_BE_REPLACED