A group show of three renowned living photographers Wolfgang Suschitzky, Dorothy Bohm, Neil Libbert whose work show the past as it was in Paris, London and New York picturing the everyday. All the photographs are black and white as you would expect of pre and post war era showing people going about their daily lives in respective cities. They were taken by photographers who were new to these cities without any preconceived expectations arriving with little or no knowledge of the problems that lie under the surface of most countries. END_OF_DOCUMENT_TOKEN_TO_BE_REPLACED

END_OF_DOCUMENT_TOKEN_TO_BE_REPLACED

Great is all I can say!

This was a great piece of work it was a shame it did not last longer after all the suspense. Still it was worth a trip to be there. A piece of theater without the actors. A stage which one becomes part of. We queued for about 5 minutes each to watch a short animation, sculptural install partly 3d modeling and partly real 3d objects called ‘Gaffer’ a Kinetic audiovisual installation.

It required darkness for the effect to be visualized. It is not easy to describe but one felt that one was observing a mirror in 3 Dimension. The sounds were realistic and the lighting controlled the observation. Everyone received a private view of the installation. The gaffer tape was 3d design and strips were stuck around as it was projected with a realistic sound of tape.

Check out their website you will see more of their work and also explanations on how the work has evolved into something very engaging. Thanks it was great is all I can say.

The show will be at Tenderpixel until 11th January 2014 closed o15th December – 7th January. So there is still time to see the show. So if your in the region of Leicester Square pop in.

The show at the Frith Street gallery was muted in some respects in the sense that the works were minimal. As a show they came together and had some connection but as individual pieces they really do little to inspire. I felt nothing. I am not sure what was expected of me in some respects. I waltz in with the hope to be delighted I suppose. May be I am just lazy and should have worked harder. END_OF_DOCUMENT_TOKEN_TO_BE_REPLACED

Meeting a friend for coffee.

I was invited by a friend to meet up on Saturday last for coffee which turned into a ticket to see a film which was a nice surprise. I was pleased I went. It was part of a series of films running at the Tate Modern by Anand Patwardhan. They are documentaries about issues in India which have a universal aspect about problems facing many countries across the globe like radicalism, globalisation etc etc. END_OF_DOCUMENT_TOKEN_TO_BE_REPLACED

The artist Helen Maurer has developed a body of work particularly for the show at the Danielle Arnaud. She uses glass, light and video as her medium. They are beautiful sensual type objects. A kind of nostalgia reminds me a little of a collection of glass wear that people use to store in their special room for display purposes.
END_OF_DOCUMENT_TOKEN_TO_BE_REPLACED

The Bond franchise gets shaken not stirred, in a heady cocktail of macho action and post-Freudian navel gazing. 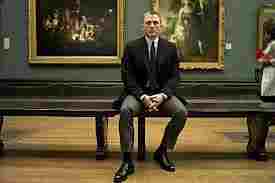 Bond drops into the National Gallery to get in touch with his sensitive side during a scene in Skyfall.

As an art form the Bond franchise has a unique place in the public consciousness. Fifty years and counting it is the longest film franchise ever, and after Harry Potter, is the most profitable.

It’s a staple diet of high-octane chase sequences, comic book spy gadgets, Bond girls that say ‘yes’ at the shake of a martini, and larger-than-life baddies who always get their come-uppance. END_OF_DOCUMENT_TOKEN_TO_BE_REPLACED