The wall paper of photos taken by the artist to me seemed unnecessary it really did not add anything to the works of mixed media made. If anything I don’t believe people seemed to pay much attention to it.

Despite this the works themselves that are hung were interesting pieces; paint covered books, to canvas with felt, paint and small wood panels with different layers; referencing modernism and abstraction, creating these relief type objects in a 3-Dimensional form. END_OF_DOCUMENT_TOKEN_TO_BE_REPLACED

A centenary of art and Jewish activity in London the Ben Uri Gallery and Museum has established something unique as an interpretation of language or should I say ontology of the jewish community that has existed in Britain for the past hundred years. The show from Ben Uri’s collection is relevant to all but more importantly to those who made the art it gave them an identity, to remind themselves who they are and where they are from. END_OF_DOCUMENT_TOKEN_TO_BE_REPLACED

I could almost hear the Cuban music playing in the background in the group show ’Concrete Cuba’ at the David Zwirner gallery in London. It was an enjoyable event in respect of the art and many their thought the same as people were concerned enough to go around the show and look closely at the art.
END_OF_DOCUMENT_TOKEN_TO_BE_REPLACED

It has been a while since I have taken any notice of the French artist Matisse. I very much prefer his cut outs but a lot of people admire his paintings. I am not one to say what makes a good artist or a Master in this respect although I would say I am a very good artist myself and may be better but then I am bias. The show was curated by Nicholas Cullinan the curator for the department of Modern and Contemporary Art at the Metropolitan Museum. END_OF_DOCUMENT_TOKEN_TO_BE_REPLACED

The KCC does what you would expect for a Korean-government funded operation – host all manner of events that promote Korean culture. The good news is that much of what they promote is by living artists who you can meet and exchange ideas with. END_OF_DOCUMENT_TOKEN_TO_BE_REPLACED

Wondering past a downpour of what look like a broken water pipe spilling its contents on to employees in the cloak room; I had just paid to enter at the National Gallery. I make the comment that I would not leave my coat and bag, the receptionist agrees. I had gone to see what was to be a sublime show which was a nice surprise. END_OF_DOCUMENT_TOKEN_TO_BE_REPLACED 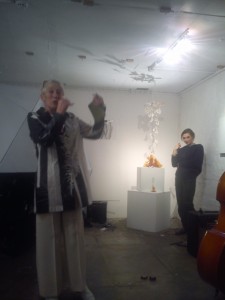 END_OF_DOCUMENT_TOKEN_TO_BE_REPLACED

Great is all I can say!

This was a great piece of work it was a shame it did not last longer after all the suspense. Still it was worth a trip to be there. A piece of theater without the actors. A stage which one becomes part of. We queued for about 5 minutes each to watch a short animation, sculptural install partly 3d modeling and partly real 3d objects called ‘Gaffer’ a Kinetic audiovisual installation.

It required darkness for the effect to be visualized. It is not easy to describe but one felt that one was observing a mirror in 3 Dimension. The sounds were realistic and the lighting controlled the observation. Everyone received a private view of the installation. The gaffer tape was 3d design and strips were stuck around as it was projected with a realistic sound of tape.

Check out their website you will see more of their work and also explanations on how the work has evolved into something very engaging. Thanks it was great is all I can say.

The show will be at Tenderpixel until 11th January 2014 closed o15th December – 7th January. So there is still time to see the show. So if your in the region of Leicester Square pop in.

They are for easy reading

Their work is shown in separate galleries. There are similarities in the use of materials like gloss paint, solid plane colours, the graphic style but that is about it. END_OF_DOCUMENT_TOKEN_TO_BE_REPLACED

Meeting a friend for coffee.

I was invited by a friend to meet up on Saturday last for coffee which turned into a ticket to see a film which was a nice surprise. I was pleased I went. It was part of a series of films running at the Tate Modern by Anand Patwardhan. They are documentaries about issues in India which have a universal aspect about problems facing many countries across the globe like radicalism, globalisation etc etc. END_OF_DOCUMENT_TOKEN_TO_BE_REPLACED